Assessment at All Saints Academy

At All Saints Academy we want each and every student to achieve or exceed their potential to support them in succeeding in their life goals and our Assessment process helps them on this journey.

Our target setting method allows us to set achievable, but aspirational, targets that are tailored to each individual student where KS2 levels have been decimalised and the grouping of students into one level has been removed, eg a student with a fine level of 4.1 will be targeted in line with other 4.1 students rather than any students in the range 4.0 to 4.9 as in previous years.

Different targets will be set for the four subject groupings below as it has been shown that achievement in these areas can differ, eg a student may be targeted higher in an EBacc subject compared to English if national achievement shows this.

Our targets are based on the results achieved nationally of students with the same KS2 fine level and while we understand that not all students progress in the same way or at the same pace we encourage an ‘I can’ attitude where students understand that they have the same chance of achieving these grades as any other student across the country.

Every student will be set targets for the end of Year 11 and for interim points at the end of each year from Year 7 through to Year 10. This enables the students themselves, parents/carers and the Academy to track whether they are below, on or above track. The Academy has created target bands to empower students to strive for higher grades.

Students’ targets and the Academy’s target setting methods are regularly reviewed to ensure students’ targets not only help them realise their potential, but stretch and challenge them too.

Communication with parents/carers is paramount and our reporting cycle reflects this. Students receive a Flight Plan after each Assessment Point as well as one Annual Report per academic year.

Annual Reports contain Working At Grades for each subject along with a brief comment from the class teacher and a score for the student’s Attitude To Learning; Target Grades for each subject group and band are provided for comparison. The student’s attendance percentage and both behaviour and achievement points are also included. Where possible, Annual Reports are sent home prior to Parents’ Evening to give parents/carers the opportunity to read them thoroughly and discuss them with the student before speaking to teaching staff. If an Annual Report is not available before a Parents’ Evening, a copy of the latest Flight Plan will be available to inform discussions with staff.

What grades will students receive?

GCSE grades are awarded as the numbers 9-1, rather than the previous system of A*-G. Grade 9 is the highest grade. The new grades do not directly link to the old system, however a Grade 7 is equivalent to a Grade A and Grade 4 is equivalent to a Grade C. Vocational (BTEC) subjects continue to be awarded using the grading system of Distinction*, Distinction, Merit, Pass and Level 1 Pass. 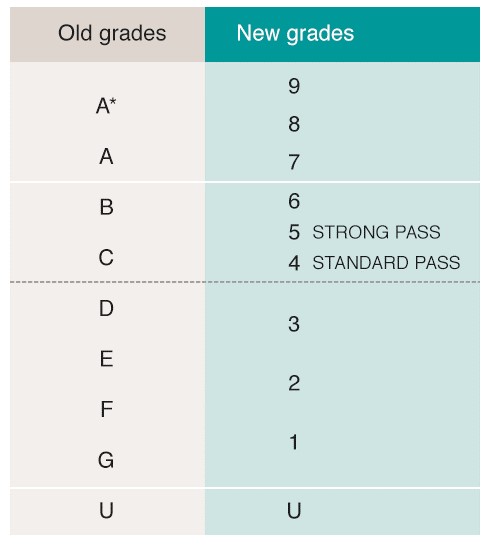 How we are judged by the Government?

Schools are now judged according to the Progress 8 measure. Progress 8 takes into account the performance of all students in their best 8 subjects rather than focussing only on students who have reached a minimum of a C grade. It measures how much progress students have made from their KS2 starting point compared to students nationally within their year group. Schools receive a Progress 8 score which is a decimalised number that can be positive or negative.

How is Progress 8 calculated?

Subjects have been grouped and these are the groups we have used in our target setting method above. The highest results for each these groups as shown below are then used as the student’s best 8 subjects.

A school which achieves the national average Progress 8 score of zero has helped its students to achieve the same progress as students nationally. The Government has a minimum expectation of -0.5 which is known as the floor target.

Progress 8 scores for all schools along with other headline measures are published on the Performance Tables.

Assessment and communication within 6th Form is similar to that used in years 7 to 11 but adjustments need to be made as 6th Form qualifications have their own grading.

The target setting method used for our 6th Form students also allows us to set achievable, but aspirational, targets that are tailored to each individual student. Targets are set in a similar way to the lower year groups but a student’s GCSE results are used instead of their KS2 results. A comparison can then be made to the national achievement of students with the same level of GCSE scores to set targets. There is no banding within targets at 6th Form but if there is a higher level of qualification available for a subject, students will receive targets for both levels, eg a student studying AS Level will also receive an A2 Level target or a student studying a Subsidiary Diploma vocational subject would also receive a target for the Diploma.

6th Form students also receive a Flight Plan after each Assessment Point as well as one Annual Report per academic year.

Annual Reports contain the same information as those received by students in lower year groups.

What grades will students receive?

The grades provided to students in 6th Form depend on the level of qualification they are studying. The grid below shows the grading for qualifications.

How we are judged by the Government?

6th Form are judged using a similar measure to Progress 8 called Level 3 Value Added which also takes into account the performance of student but in all of their subjects rather than a select few. This is then compared to the national performance of similar students. Schools receive separate Level 3 Value Added scores for each type of qualification ie Academic (AS/A2) and vocational. It is also a decimalised number that can be positive or negative.

A school which achieves the national average Level 3 Value Added score of zero has helped its students to achieve the same progress as students nationally. The Government has a minimum expectation floor target of -0.3 but this is still to be confirmed.

Level 3 Value Added scores for all schools along with other headline measures are published on the Performance Tables.