Recently, year 10 GCSE art students have been working on 3D sculptures using food as a starting point and Claes Oldenburg as inspiration. The class have produced some giant sculptures working in groups. 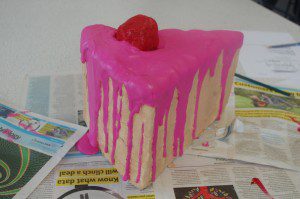 “I think being able to work in a pair or group is easier and better because work gets completed quicker and you get to share ideas to make better work. Mine and Kelsey’s strengths were being able to work together well and combining our ideas to produce a good piece of work. Our weaknesses were going over the paint too much and accurately painting around the icing as it was hard to keep the paint even. I think our piece of work is really good and looks realistic. I will definitely use ideas form this in my next piece of 3D work.” Eryin-Rose Griffin 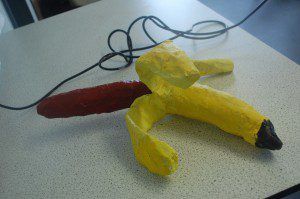 “We started off  by creating the centre curved piece of the banana out of rolled up newspaper and then made the pieces of banana peel out of the same material but with a piece of wire through the middle to hold it in shape. This was all taped together. Strips of modroc were cut and dipped in water. These were plastered over the entire shape. These set into place and dried hard. We painted skin / peel yellow. The flesh was originally going to be multi-coloured but it got ruined when brown paint got on it. Different coloured paint is still splattered over to try and rescue it.

I do like the final piece but it would be better left in the original colours. I enjoyed using modroc and would like to use it again on a different subject. It was very easy to use but it struggled to stay in place on the underside of the peel until it began to dry. At this point it was good to add layers of paint to.” Ben Watkins 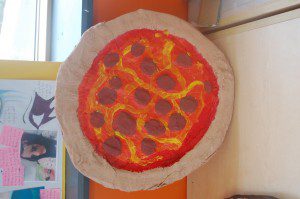