For many years the Diocese of St Albans has organised an event designed to raise both awareness and funds for homeless charities in Bedfordshire and Hertfordshire.

Two years ago four staff from All Saints took part on a wet and windy night and on 2nd December this year we returned in force
with four year 11 students leading the way supported by  five staff members and one spouse.

The weather was less than ideal. 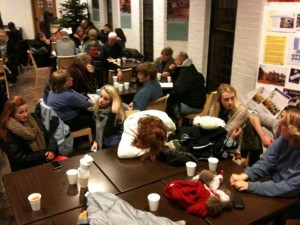 The rain started at 10pm and carried on until 5.30am, it was accompanied by a gusty wind which tugged at what little shelter we had between the ancient buttresses of the Abbey, blowing drizzle into everything which then pooled on the soft ground underneath us. Despite the conditions, the soggy and exhausted team completed the night in good spirits and raised over £700 (at latest count) for NOAH Enterprise in
Luton. Were we thankful we only had to do it for one night? You bet! 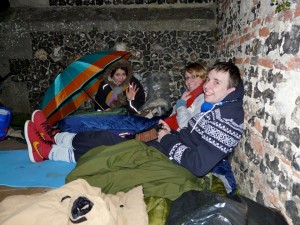 Congratulations especially to Ashleigh Coffill, Natasha Ryan, Ariann Hayden and Shannon Cook for their maturity and generosity towards  a really good cause.